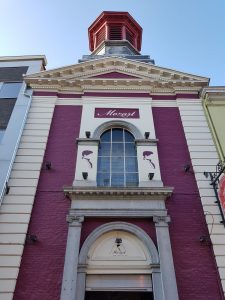 Aalst was the first Mozart to open on November 22nd 2017.

After a long search for a suitable building, we were able to settle Mozart in this formar chapel.

You will be welcomed by Jarno Bogaert, the manager at Mozart Aalst.
Every day, Jarno and his entire team, gives there best to make your visit at Mozart cosy and rememberable. In the kitchen, chef Filip and his team makes sure that we serve you our famous ribs and all other plates at there best.

Small history of the building:

The whole site, continuing to the “oude Peperstraat” was used from the 15th to the 18th century as a hospital. Since then, it became an army barrack and a prison.
In the 20st century, the police and court was housed in the building. meer informatie

Our part of the building has a nice history. Inside, you can still see lots of the formar chapel.
Here, you can see a picture of our building at the time that it was still used as a chapel.

BOOK YOUR TABLE HERE
Our booking system automaticaly checks the availibility on your requested date.

PLEASE TAKE NOTE FOR A GROUP RESERVATION:
Due to the architectural style of the building, we only have a few options to seat your group tables next to each other.
We will make sure that your group will be seated all together, however 1 table isn’t always possible.

If you are 25 persons or more, we will open on request, so at all times, even when normally closed.
This is possible “à la carte” or we are happy to provide a personal menu to each and every budget.
(EXAMPLES OF GROUP MENUS)

Located at the city center of Aalst, so easy accessible by car or public transport.
You can park your car in the surroundings or in one of the car parks in the neighborhood.

Mozart Aalst is only 5 minutes on foot from the railway station of Aalst.
The railway station of Aalst is in the center between Brussels and Ghent.
If you’re travveling from an other direction, Denderleeuw is an easy transfer.
This way, you don’t have to worry about traffic jams, and after the dinner, you can go home without any problems (even if you had a drink or two…).

On your way by train.

Mozart Aalst is only 5 minutes on foot from the railway station of Aalst.
The railway station of Aalst is in the center between Brussels and Ghent.
If you’re travveling from an other direction, Denderleeuw is an easy transfer.
This way, you don’t have to worry about traffic jams, and after the dinner, you can go home without any problems (even if you had a drink or two…).

If you prefer to travel by car, it’s easy to park in the neighborhood..
There are 11 car parks in Aalst, 4 of wich are very near.
DO NOT PARK across the street at Mozart, because this is not allowed in the first half of the street. In the second half, it’s possible to park, PAST the signs.

Underneith a map with all car parks. You can download the plan or click for more info.

CLICK HERE for more info an AALST and the car parks.

Besides the public transport, you can always travel by bicycle.
Near the park at the end of yhe street, there are multiple racks to park your bike safely.
Around the corner, near the city hall, there are bicycle parkings as well, although they are often full.

If you are 25 persons or more, we will be happy to open the restaurant on request, so at all times, even when normally closed.

This website uses cookies to improve your experience while you navigate through the website. Out of these cookies, the cookies that are categorized as necessary are stored on your browser as they are essential for the working of basic functionalities of the website. We also use third-party cookies that help us analyze and understand how you use this website. These cookies will be stored in your browser only with your consent. You also have the option to opt-out of these cookies. But opting out of some of these cookies may have an effect on your browsing experience.
Necessary Always Enabled
Necessary cookies are absolutely essential for the website to function properly. This category only includes cookies that ensures basic functionalities and security features of the website. These cookies do not store any personal information.
Non-necessary
Any cookies that may not be particularly necessary for the website to function and is used specifically to collect user personal data via analytics, ads, other embedded contents are termed as non-necessary cookies. It is mandatory to procure user consent prior to running these cookies on your website.
SAVE & ACCEPT
Loading Comments...